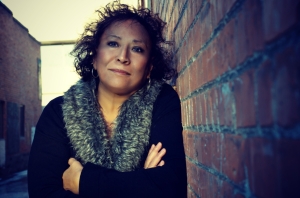 Patricia Santos Marcantonio comes from a family of storytellers.
They tell stories about their own past and traditions, tales about people they have met and things they have done, and all in a way that makes you want to keep listening and beg for more. That’s where she got her desire to write and tell stories of her own.
She earned a Bachelor of Science degree with distinction in mass communications from the University of Southern Colorado (now Colorado State University-Pueblo). She is an award-winning journalist and served as a Newspaper Association of America New Media Fellow.
Her children’s book, “Red Ridin’ in the Hood and Other Cuentos,” (Farrar, Straus and Giroux) won an Anne Izard Storyteller’s Choice Award; and earned several recommendations including: Commended Title – Americas Award for Children’s and Young Adult Literature; Starred review–American Library Association; Best Collections to Share – Wilde Awards; and recommendations from Bulletin of the Center for Children’s Books, Kirkus Reviews and Publishers Weekly. The book was also ranked among Amazon.com Latino children’s books best sellers.
She also co-authored “Voices From the Snake River Plain” and contributed to and edited “Hauntings From the Snake River Plain,” and co-wrote with Bonnie Dodge, “Billie Neville Takes a Leap.”

Her screenplays have won, placed or hit the top percentage in several contests, including MORE Women in Film, Screenwriting Expo 5, Women in Film Las Vegas, the Phoenix Film Festival contest, Reel Women of the West, Idaho Writers Guild and Cinestory.

Member of Dramatists Guild of America and Idaho Writers Guild